What is a Pyramid Scheme?

Every few years, the news headlines start buzzing with stories about investors losing money in the latest pyramid scheme. A pyramid scheme is a financial scam that looks totally legitimate at first glance but in fact isn’t. Knowing what they are is the first step to avoiding them.

Most of these schemes are based on investments and recruiting salespeople with promises of excellent returns or earnings. However, in reality, initial investors are the only ones who make any money while those who join later usually end up losing their investments.

Read on to find out exactly how pyramid schemes work, what types of schemes are out there, and how you can avoid becoming the next victim. 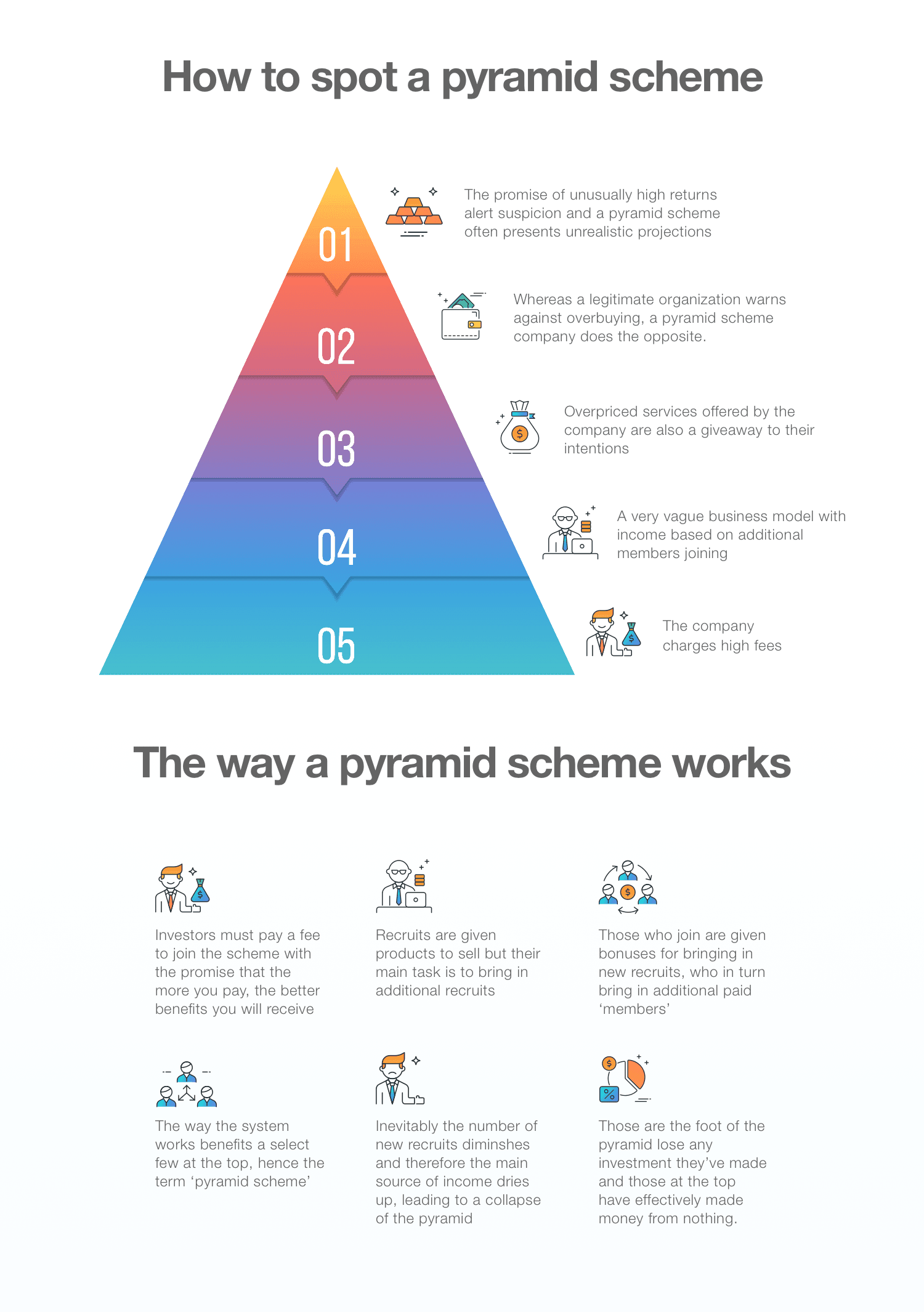 How Does a Pyramid Scheme Work?

Pyramid schemes get their name from the distribution of earnings that take place between their members. Most of the funds in the scheme go to the initial investors at the top, while subsequent investors end up funding the scheme, eventually getting little or nothing out of it.

Instead of investing their members’ funds responsibly or providing them with products that really sell, pyramid schemes simply take the initial signup fees paid by new members, pay them a few good investment returns or sales commissions to keep them happy, and then move on to the next member.

The fraudulent side of pyramid schemes is that you’ll never know this is the case: the scheme will always claim to generate its income from investments or product sales.

Eventually, the income from new members runs out or is insufficient to pay commissions to other members and the scheme collapses. At this stage, every member loses the money they invested in the scheme and the founders, if arrested, face criminal charges.

There are Different Types of Pyramid Schemes

Pyramid schemes come in different varieties, but they all operate in roughly the same manner. The most common types of pyramid scheme perpetrated by scammers are discussed in more detail below.

Almost everyone is familiar with successful multi-level marketing businesses like Amway and Herbalife. These companies encourage their distributors to recruit and train new salespeople and let them earn a commission both from their own sales and the sales of the distributors in their networks.

While legitimate multi-level marketing businesses are perfectly legal because they sell real, useful products and services, multi-level pyramid schemes are fraudulent because they derive all their income from signup fees.

If you receive a letter, email or other message inviting you to join a multi-level marketing company that offers large financial rewards but low-quality products, it should automatically be a red flag.

Multi-level marketing schemes will always emphasize recruitment of new members over sales. In fact, some schemes may not even bother to send you anything to sell at all.

If you’re simply recruiting new members to take a commission from their signup fees, you’ve not only been lured into a pyramid scheme, you’re actively promoting it. It’s best to avoid these types of schemes altogether.

A primitive but tricky type of pyramid scheme is the chain email and you may have been the unwitting recipient of these messages in the past.

While chain emails may sound silly or as easy to detect as scams, a surprising number of people are taken in by them. Typically, after paying the person who sent you the letter, you’ll send it on to a number of people and receive nothing from them. After all, they’re free to delete it and never send you a cent.

As with all the pyramid schemes on the list, it’s best to simply ignore chain emails and move along.

Just as multi-level marketing schemes mislead new members by posing as direct sales companies, Ponzi schemes present themselves as investment companies. People around the world have lost millions - in fact, billions - of dollars through these schemes.

Ponzi schemes can appear to be legitimate investment funds at first glance. In fact, the famous case of Bernie Madoff who used his licensed investment fund to defraud clients of $65 billion over 20 years shows just how convincing they can be.

Named after Charles Ponzi, who was jailed for defrauding the public of $7 million back in the 1920s, the Ponzi scheme targets investors who are always keen for higher-than-average returns.

Unlike chain emails and marketing schemes, Ponzi schemes may appear extremely legitimate to the untrained eye. In fact, some financial experts have been taken in by the more sophisticated Ponzi schemes.

While higher returns in exchange for one or two-year fixed investments may be a red flag, this is also a common practice in the financial industry.

In general, the best way to avoid joining a Ponzi scheme is to work with reputable brokers and banks that issue regular audit reports while resisting the urge to invest in something that looks too good to be true.

Unlicensed brokers, small firms that have a fly-by-night attitude about them, and brokers which sell their investment products door-to-door are definitely worthy of suspicion and skepticism, especially if they promise or guarantee returns.

With the advent of social media there is a new generation of pyramid schemes making the rounds. One of the most famous examples was the Loom Circle scheme, which promised to pay its members 8 times the amount they had invested.

How to Identify a Pyramid Scheme

All pyramid schemes have several things in common that set them apart as scams. If you encounter a scheme that fits this description, you have every reason to be suspicious:

Overall, the age-old advice applies: if it’s too good to be true, it probably is. Pyramid schemes sound great on paper, but they are one of the fastest ways to lose money.

All Pyramid Schemes Will Collapse in the End

One of the sneakiest aspects of pyramid schemes is that they usually pay dividends or income at the beginning to lure in new members. This makes them seem totally legitimate and may even encourage you to invest more in the scheme.

In the end, however, all pyramid schemes collapse. The more you have invested, the more you stand to lose.

To avoid becoming a victim of a pyramid scheme, try to always have reasonable expectations. A high income is the result of hard work and in-demand skills, and market-beating investment returns are the exception, not the rule.

By sticking to legitimate businesses, employers and investment brokers, you’ll limit your exposure to pyramid schemes and keep your hard-earned money safe from falling prey to devious scammers.

Want to stay in the loop? Sign Up to our Newsletter

We value your privacy. We never send you any spam or pass your information to 3rd parties.

This website uses cookies to improve your experience. We'll assume you're ok with this, but you can opt-out if you wish.